Inicio » What to do? » Archaeological Sites

Archaeology
Archaeological research in the most representative sites. 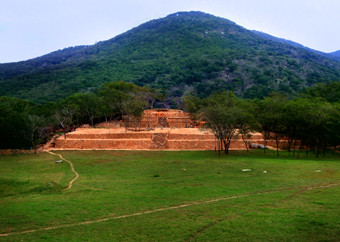 Few people know the enormous potential archaeological having Guerrero. At various times, the National Institute of Anthropology and History has made ​​recording archaeological sites or areas of different nature and age necessary activity before moving on any archaeological investigation.

Between 1939 year which identified one hundred thirty-six sites and the latest report of 2007, the number of sites that are known to increase almost two thousand. Registered areas, only a few have done rescues, salvage or specific research projects, and only seven are considered open to the public.

Several archaeological sites investigated, although not to visit or have disappeared, have left important information to know and understand the development of pre-Cortesian societies.

Guerrero archaeological interventions have gone through several moments that reflect the various approaches and depth of work and research. We can distinguish four stages, of which we shall mention, in broad strokes, we consider only those have contributed to better understanding of the archaeological past.

Progress, Problems and Prospect of Archaeology in Guerrero

Today it is untenable the idea that the societies that lived in the present state of Guerrero were underdeveloped, lacking its own culture and its evolution depended on influences from more advanced cultures. The data provided by archeology, especially in the last thirty years, indicate the opposite. Among the most significant contributions are to know that Guerrero was an integral part of Mesoamerica from Olmec era and that the particularity of its archaeological remains separate it from the rest of western Mexico, the Olmec ruins verify that the entity societies correspond to highly hierarchical and are as old as the Gulf Coast, the finding that the roof system known as false vault hails and oldest in Guerrero and influence coming from the Maya area, and have determined that Mezcala

style sculptures are part of a regional culture, Mezcala archaeological culture, which preceded and survived a Teotihuacán.

There are, however, several problems to solve. Despite substantial advances in recording sites, there is still lacking coverage of large areas in the state, as the Mountain, the Tierra Caliente, the Costa Chica, and the high Sierra Madre del Sur and the Upstate. Research in these areas and more, if not nonexistent, is inadequate and disjointed, there are huge gaps in knowledge of the Classic and Postclassic Guerrero in general continue to identify some objects only for their style, as style figurines Xochipala but no one knows what belonged archaeological culture. Also unknown antiquity and nature of relations with cultures extramesoamerican Guerrero, collected by the introduction of metallurgy in the Balsas Basin, for objects of Central or South American styles, like the tombstones of placer gold or pots Tezahuapa , and now some of the U.S. territory, such as pallets Honokam.

Thus, there is still much room ahead in regard to archaeological research in the state. The perspectives, it is true, are not as encouraging as we would like, because this activity faces several obstacles, often outsiders. However, archeology is fascinating and Guerrero with each stroke is discovered evidence that revolutionizes prior knowledge. So, despite everything, archaeologists interested in the past continue to work with extraordinary enthusiasm. For its effect, I end by quoting a paragraph written over half a century ago by Roberto Weitlaner notable anthropologists and Robert Barlow: Should not some of the effort now very commonly directed towards spectacular excavations derived to regions that have remained too long in white on the map? “.